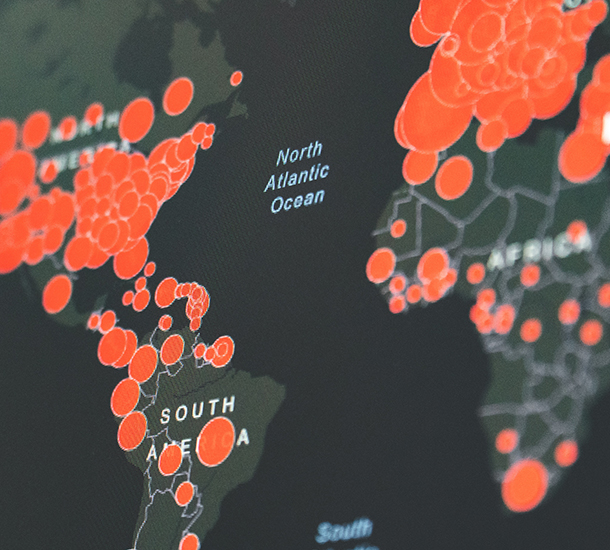 Total new cases throughout the world increased through June and July, reaching a peak towards the end of June at over a quarter-million new cases per day. Deaths, however, peaked in late April at about 10,000 per day and dropped off significantly throughout May to just over 1000 deaths per day. Deaths have increased, but have reached a plateau at just under 6000 deaths per day worldwide.

Statisticians continue to argue over the real number of COVID-19 deaths. There is evidence that the total number of deaths in the world is higher than 6000 per day, but there is also evidence that an overly broad definition of “COVID-19 death” is used in many locations. For example, a senior health official in New York was asked how a fatal motorcycle accident would be reported if the driver was an asymptomatic COVID-19 carrier. The official said that this would be reported as a COVID-19 death.

Currently, the most hard-hit area of the world is Latin America which is responsible for almost a third of all cases in the world. North America is still responsible for about a quarter as is Asia. The hardest-hit large countries in the world are Peru and Colombia at just over 20 cases per 100,000 per day. To put that in perspective, the United States is currently running at just over 14 cases per 100,000 per day.

As you think about statistics, it is very important to note that the demographics of this epidemic have shifted over the past few weeks. We, as societies, have learned that it is important to protect vulnerable populations such as nursing homes and people with other significant diseases. These people have also learned that is important to take care of themselves. Consequently, the rates of infection are no longer evenly spread across age groups as they previously were. Younger people, especially those in their twenties, continue to engage in riskier behaviors which has resulted in a higher disease incidence in this demographic. However, the rate of severe illness in that age group has not changed. It is still true that very few of these young people become significantly ill once they are infected with COVID 19, and even fewer die. This explains why we have seen significant increases in case counts, without the corresponding increase in deaths.

As you hear news reports on various case counts and fatalities remember that the numbers reported are often chosen for shock value rather than an accurate representation. Frequently, even on government websites, the numbers reported are totals. When you see these kinds of numbers your first questions should be total “over what period of time?” and total “over what size population?” because absolute numbers alone are not helpful. If you find that you are interested in following the numbers of the epidemic, remembers the numbers 1, 10, and 25. These numbers, representing cases per 100,000 per day, are the key breakpoints for rough estimates of epidemic severity.

Currently, in the United States, all the states along the southern border of the country are in the highest category except for New Mexico and California. The remainder of the country is a mix of the two middle categories. Only Vermont and Maine are currently in the range of negligible transmission.

Some interesting research was announced out of Germany last week. They looked at a group of recovering COVID-19 patients across the spectrum of severity. Cardiac MRIs found that greater than three-quarters had some evidence of cardiac involvement such as inflammation of the heart muscle, as far out as three months. These German patients will be followed for a prolonged period to assess how long it takes for this to resolve. This is likely a large reason why some COVID-19 patients take a long time to fully recover after they have cleared the virus.

A study in the journal Physics of Fluids looked at relative protection from various types of face coverings. While not a clinical study (it used mannequins and cough simulators), it is a useful comparison of relative effectiveness. According to the study’s results, a bandana made of T-shirt material cuts the distance that particles travel from an unprotected cough to slightly more than 3.5 feet, while a folded handkerchief reduces that to slightly over one foot. A stitched cotton mask reduces the distance of the particles to just 2.5 inches, while an over-the-counter commercial cone mask, found at drugstores, can allow droplets to go an average of eight inches. The advantage of typical disposable masks is standardization, but the study does show that well-made cloth masks can at least be effective.

COVID-19 has taught us that simply referring to the historical behavior of respiratory viruses, which is where the concept of a second wave has come from, is not useful. The infection dynamics of this virus are different. We have learned that the big drivers for this virus are close person to person contact. Since infection is primarily person to person via droplets and small, temporarily airborne particles, anything that drives more people closer together will increase the spread of the disease. Will the natural migration indoors in the fall do that? We don’t yet, but there is some evidence that just as New York City was “scared straight” by its experiences of April and May, the rest of the country may be learning that it doesn’t take much close socializing to rekindle the epidemic.